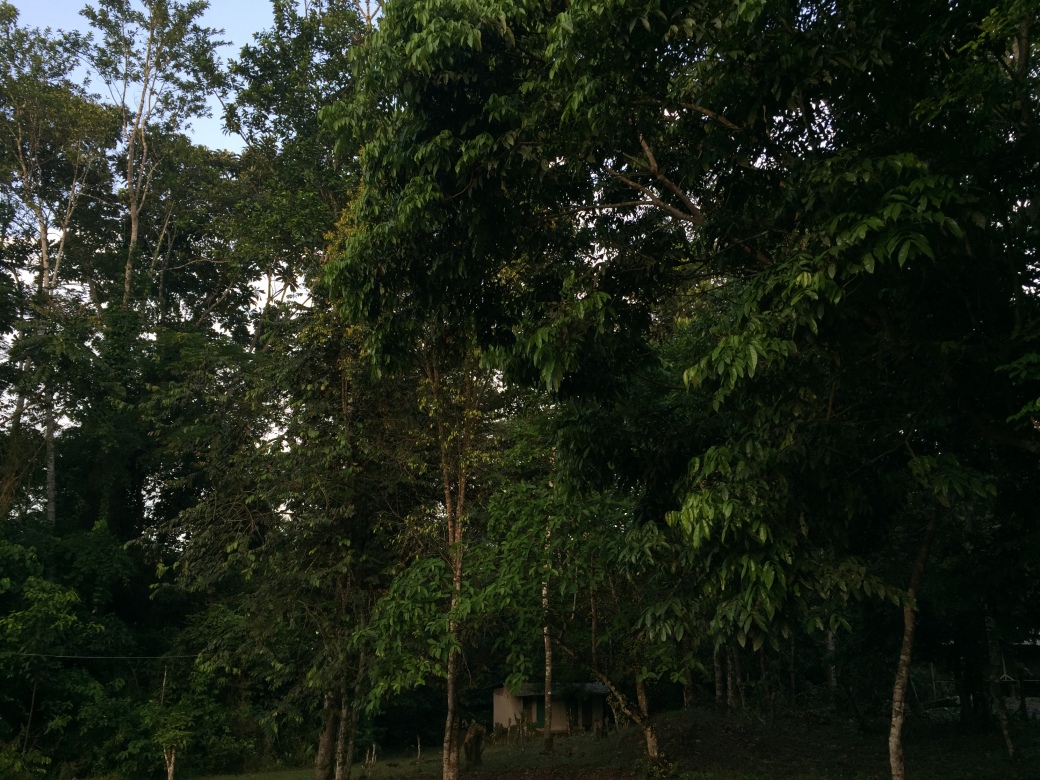 A breathtaking view. Perhaps more so, when you consider that this is just the edge of a small section of forest in the inhabited areas outside the Park buffer. The actual Park is a whole other story. I have been pining for a visit to the Sapo National Park since I took an interest in birds. It is an Important Bird and Biodiversity Area, and Liberia’s largest protected, so I have high expectations. The Great Blue Turaco surely a bird to look forward to. The Nkulengu Rail is in the top five. Oddly, the top of my list is not occupied by a bird, but instead, by the rare and endangered Pygmy Hippopotamus. I don’t expect to see it, though, not lurking around the edges of forests as I plan to do.

The 13 hour ride here was just barely bearable, and after a half day’s rest, I take up my binoculars, book, and music player and head for the nearest patch of forest. This is three meters away from my window. I am drawn here, in fact, by the chattering by what sound like Leaf-loves. I am accustomed to savanna and city birds, and can only liken these new species to those calls I have heard before. The would-be Leaf-loves are medium sized birds, with rusty red tails and brownish bodies. Their heads are grey and their bellies are a toned down yellow. At their throats are magnificent white beards, any longer and they would rival Gandalf’s. At least that is how the beards appear to me at first. A closer look shows that they are thick, not long, but they are still beards. There can’t be that many bearded birds in the book, after all. One moves out of the shadow of the trees, and I take a quick photo. 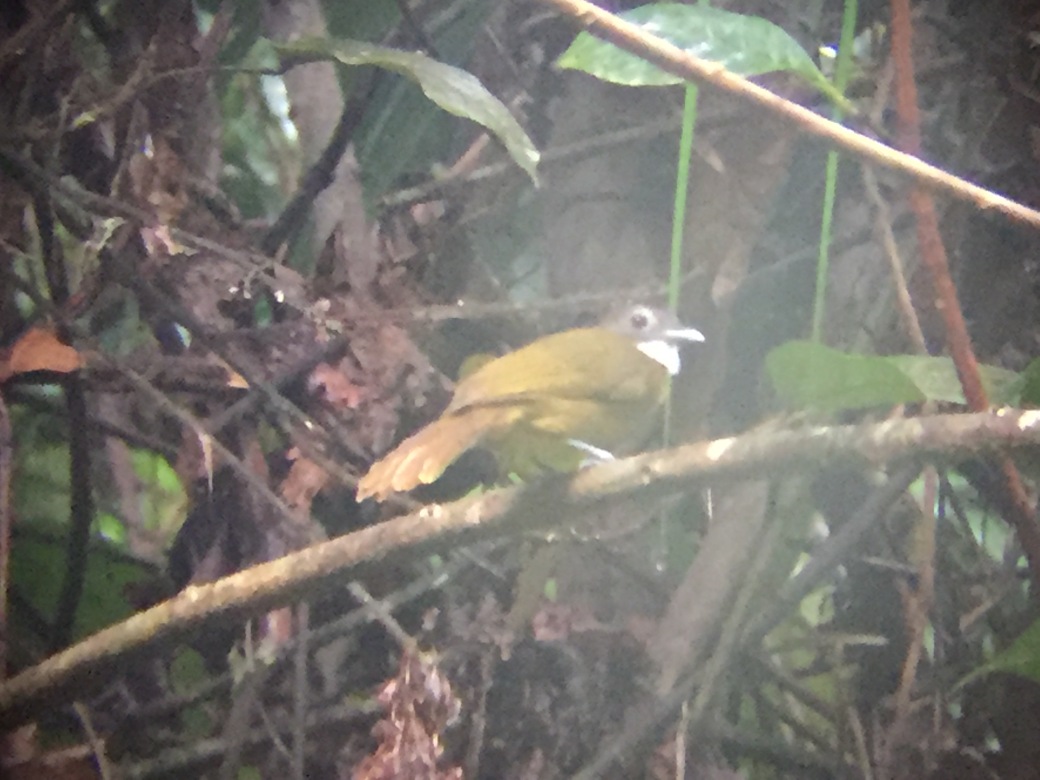 The birds are calling to one another and jumping about from branch to branch. I watch them for a minute, enjoying my first species of the day. Then I look at the Bulbul page, because their calls, as well as body shape, tail shape, and behavior are very like the other bulbuls. Bulbuls are the collective name given to the Bristlebills, Greenbuls, Bulbuls, and Leaf-loves. If I had my way, I would add Babblers, and call them all chatterers because it sounds to me like all these birds chatter a lot. This bird turns out to be a Red-tailed Bristlebill.

The species is a new one for my life list (list of birds I have seen in my life). The description mentions that it travels in mix species flocks, so I take a look at each bird in the party. There! One of them has a yellow throat. I follow it carefully, and when it turns, I see that it lacks the yellow belly and red tail. It is completely green-brown besides the throat. A quick search shows that this is a Yellow-bearded Greenbul. It moves off into the forest before I can get a good photo of it, but a sighting is okay for now. Meanwhile, I’m baffled that already I’ve seen two bearded birds! Another bird flies past, and I catch a quick glimpse of a yellow belly and chin, and a grey head on an olive green body. This is a Grey-headed Bristlebill. It is gone too fast, too. Another of the party of bulbuls flies out of the forest. It seems to be in less of a hurry than the others, and perches on a vine where I can see. It is a bit smaller than the Yellow-bearded Greenbul, and is a uniform olive green except for the handsome yellow mustache. (I looked it up, and that style is called an A La Souvarov moustache). It turns, calling loudly to the rest of the party, and I see a bright orange legs. This is a  Ain’t no party like a bulbul party, right?

I hear a mewl from the bushes, and look up quickly, fully expecting to see a medium sized cat lurking there. I squint at the underbrush. The sound moves again, and I see no movement on the ground. Must be a bird. The sound reminds me of a Cinnamon-breasted Rock Bunting, but this is a strictly rocky area and savanna bird, so probably not. After a bit of searching, I see the bird. It is a medium-small bird, and the what I notice immediately is the bright white eye in a dark grey face. It turns and I see a black tail with white patches on either edge. My first thought is that this is a honey-guide, because of that peculiar tail, but it looks like none of the birds on the honey-guide plate. This will have to be an ‘Unidentified’ sighting for now. I enter it as such, and return to observing the bird. It flies to a short tree with little bright orange fruits and begins its breakfast. In a minute, a second one of the same species calls and then joins the first. This one has a dark eye, and is very slightly smaller. This could be a juvenile or a female. This second bird joins the first in the repast. I take hasty shot of the closest one, the adult. These, too, are active birds, never staying put for more than 20 seconds.

I look again at the honey-guide plate, then increase the count for the species to 2 and return to the party of bulbuls. A different call sounds in the party, and I look at the plates, to check the distribution and perhaps narrow down the species whose calls I will compare. There, on the plate, is the unidentified bird. A Honey-guide Greenbul. Victory! (And luck!) I record the species, and move carefully towards the tree, hoping to get a photo of the juvenile. Both take off and land a short distance away at the edge of the forest. I study my pictures, hoping I had captured them side by side in one. I reach up and pluck a couple of the tiny fruit. Ewlk! It tastes awful! So bitter. These birds must either really be hungry or have acquired a taste for what I assume must be a very medicinal plant. Ewlk!

A group of 10 or so birds fly off from the tree tops a few hundred meters away. I don’t see any details on them but their bellies, which are a creamy white. In keeping with the rest of my sightings, I check the bulbul plates, but none of the details on there help. So many birds have white bellies. Moving away from the Honyeguide fruit tree, I wonder about that. I hear a piping call, quite loud and unashamed. A medium large bird swoops over the tree tops with an odd lilting flight pattern. It beats its wings and climbs a bit, then glides a bit, then repeats this exercise. This style doesn’t seem to deter it, because in a few seconds it is close enough for me to see. It is black besides the white belly, and has a large yellow beak with a splotch of red. It lands near the top of a tall tree, and I take a quick picture.

And not a moment too soon, because the Pied Hornbill moves out of sight towards the center of the tree. I can hear it calling, but the call is getting more distant by the second. A small bird flies about far above. It is just a dark shape against the bright sky, but the tail is pointy, and the wings long. Likely, all I will ever know about that bird is that it is a swift. There are too many swifts it can be, and the bird will remain high in the sky, ducking and cartwheeling to avoid (imaginary?) predators.

A whistling call comes from the stand of trees on the other side of the clearing where the camp is built. I see a flash of yellow in one of the trees, and advance to the area. There are two species in the trees there! The first one has a forest green back, and a grey head, back and front. It has patches of white on its back, and a gorgeous orange color on its chest shaped like, well, a bib. It moves off quickly before I can verify what it is. This is a bush shrike, whose call is a long, high whistle. The other has a yellow back, but with some areas of black, white and grey, so it looks like there are forest green patches. When it turns, all other details fall away. It has a black head, and against that, a bright orange beak, like a kingfisher’s. I don’t even look at the colors on the belly (honestly, I try, but the face is so striking). I can already tell this is an Oriole. I play its call, and it moves closer moving about in the trees, looking for the source of the call. It somehow carefully keeps its beak behind twigs or in the shadows the whole time.

I hear more birds calling, and see a path into the forest. I move quickly down the path. A medium sized black bird flies past me and perches on a shrub ahead. It’s chest is the only color on it, a red square. It chatters a bit, reminding me of weavers, and then moves on. Malimbe! I glance at the Malimbe plate, and immediately identify the bird: a Blue-billed Malimbe. The bill had seemed somewhat bluish, but I identify it by the red square. All the malimbes are black with red or yellow features, but the Blue-billed Malimbe is the only one which has only the red chest square. I see movement below the area the Malimbe has just vacated, and see a smallish bird hopping around on the ground. It has a brown head and back, and a grey belly. In keeping with the morning’s theme, I assume it is a bulbul.  I’m right. (It is also too stoic to be a warbler). It turns out to be Baumann’s Greenbul.

It is 8:30 now, so I have to tear myself away from the forest’s edge. I have added 10 new species to my lifelist in an hour and a half, and had barely walked 500 meters. It takes weeks to do that in most other settings. I love this park! Work starts at nine. Time to head back, but I know I will be back this afternoon for sure!

2 thoughts on “A dayful of forest birds: Part 1”

This is a text widget, which allows you to add text or HTML to your sidebar. You can use them to display text, links, images, HTML, or a combination of these. Edit them in the Widget section of the Customizer.